aixit partners under the sports and technology magnifying glass

We take the national team break in German basketball as an opportunity to look at our partner basketball teams FRAPORT SKYLINERS (BBL) and Uni Baskets Paderborn (ProA).

Both teams are on course athletically and are aiming for a place in the playoff places. Beyond that, great things are happening in other places and there are technical issues at both clubs that we at aixit would like to shed light on.

FRAPORT SKYLINERS
The Skyliners' season so far has been like a roller coaster ride - although roller coaster rides do have their charms. Great and inspiring victories are followed by sometimes disappointing defeats. Especially against the top teams in the league, the Skyliners are having a hard time and are hardly able to pull off any surprise victories. All in all, observers have the feeling that the team around the experienced perennial player Tez Robertson, (12th season as Frankfurter and thus three years more than the aixit/Skyliners partnership) is a bit in search of final tuning.

Yannick Binas, authorized signatory and sales manager of FRAPORT SKYLINERS summarizes the sporting situation as follows:
"We were aware that this Corona season will be an exceptional one. Our focus was and is on maintaining the structures we have built up over a long period of time and the goal is to stay in the league (as early as possible). Despite minor setbacks in between, we are on the right track and always want to show the fans that we are fully committed. The consistency will then surely come more and more by itself."

Nevertheless, the team is currently in 10th place in the standings with 7 wins and is thus within touching distance of the playoff places. In a season, in which by missing spectator incomes before beginning of the season only the class receipt was explained as a goal, surely a success.
New American shooting guard Matt Mobley, who is second on the top scorer list in the entire BBL with 19.1 points per game, has played a big part in this.

Something big is drawing the attention of many away from the sporting action towards Kaiserlei. There, if everything goes according to plan, a large sports and cultural arena with 13,000 seats is to be built under the company's own management and with a regional network of supporters, and the first TipOff is to take place as early as 2025.
For it around the managing director Dr. Gunnar W?bke an operating company was created and presented in the middle of February the plans in a large press conference. All information can be found at: www.arena-am-kaiserlei.de
The press conference was again made possible by aixit and its technical support. To ensure uninterrupted streaming of the fully digital press conference, an LTE backup router was installed in addition to the gigabit connection of the Skyliner office. This would have switched on in the event of a line failure and taken over the upload of the stream. It didn't come to that, but safe is safe in any case.
"The short-term and uncomplicated support from aixit for such important projects is exactly why we are such a big fan of the company and why we like the partnership so much," says an all-around satisfied Yannick Binas. "We're really looking forward to aixit's ideas for letting off steam with the technical possibilities of a new arena and are already exchanging ideas on this intensively."

Uni Baskets Paderborn
The Baskets are playing a very entertaining season in the 2. Liga ProA. By the surprise news that they presented the experienced and really HARD to stop first league veteran John Bryant in Paderborn to support, went through the entire basketball press. And when exactly this Bryant then also provided after short orientation phase for many victories, the responsible persons patted themselves rightly on the shoulders. But these performances provided John Bryant in the meantime again an engagement in the basketball federal league with pouring and the Baskets try to compensate the loss.

Although therefore just in the past games the worm is in and they could bring in only 2 wins from the last 5 games, they are still in sight of the playoffs with 11th place in the standings and only two wins behind 7th place. Head coach Steve Esterkamp is therefore not dissatisfied either:
"It's a tough season with extremely many injuries and we can hardly play with our usual lineup. But I am very happy with the effort the guys bring every day and that is the main thing. I love our team."

Technically, a lot is also revolving around LTE at the Baskets right now. After the aixit LTE router performs well on away trips and even many players watch movies online during the trip, there are still annoying failures at Maspernhalle when streaming home games, so the LTE router has already helped out here as well.

aixit CEO Holger Grauer: "It's not nice that the streams of the home games fail so often. We're currently looking at all options to equip the Maspernhalle with a gigabit line so that everyone can watch the great games without interruption in the future." Holger Grauer did not yet want to reveal what role the new line plays, which aixit has been lighting up since the end of last year in the direction of Paderborn. "There will be big news in this direction soon" he added with a smile. 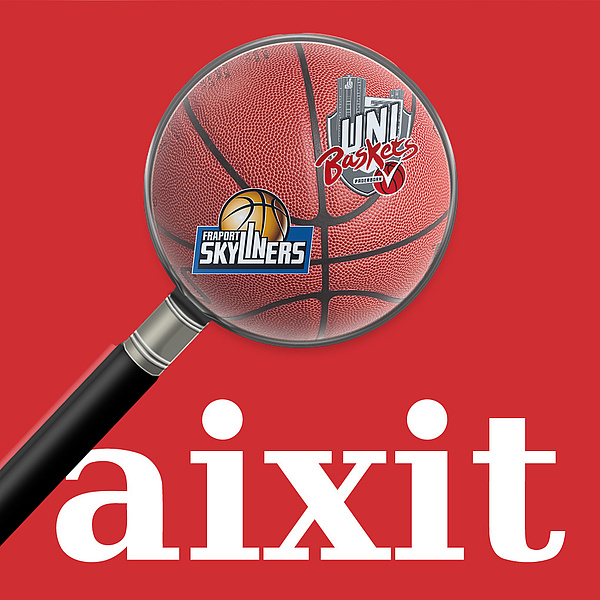