The professional basketball players of the Uni Baskets Paderborn accepted aixit's invitation and visited the Datacenter Frankfurt on their way to the away game in Karlsruhe.

We summarized the day and looked at what happens when such giants stand in and on a modern Datacenter and suddenly get a meal, which they did not expect so.

The team around head coach Steve Esterkamp and GM Dominik Meyer started the journey already on Saturday in their own bus, in order to tank up some strength and not to have a long journey in the bones directly on the game day. For more than two years, an aixit LTE router has also been a constant companion on the bus, providing the big boys with speedy Internet during the long away trips.
That's one of the reasons why the Baskets were eager to take the opportunity and accept aixit's invitation to take a look at the Datacenter Frankfurt and the services of the Frankfurt IT company in person.

Not quite sure what to expect, the Team arrived in good spirits at Rebstöcker Straße 55 and were greeted directly by aixit managing partner Holger Grauer.
"They were a bit shy, but I am taken with how polite and interested the whole team is. Steve and Dominik have really put together a great group," said the enthusiastic boss of aixit afterwards.

After the short welcome, we went directly to the Datacenter area. The whirring of the fans, the cold air and the many flashing lights impressed the basketball players very much. Questions were answered as to whether all systems were really running all the time and what aixit would have to pay for an electricity bill. In addition, the security systems, as well as monitoring sensors, were an interesting eye-catcher for everyone.

After a brief inspection of the offices, another highlight followed: a visit to the roof of the Datacenter. High up in the Gallus, there was a somewhat foggy but nevertheless great view of the Frankfurt skyline. Here, some of the Paderborn team proved that they have little fear of heights. Team supervisor Olaf Storm in particular had to be slowed down a time or two when he really wanted to examine every edge of the roof for height to the ground. "There's no way we would have done this in windy or wet conditions" said Holger Grauer afterwards placatingly "but this way it was really great for everyone!"

The next surprise followed the guided tour. Together with the branded team bus of the Uni Baskets Paderborn they went to Taunus for the team dinner. The team did not know until then that the invitation would lead to the XXL Restaurant Waldgeist. The oversized portions caused great amazement and many Instagram photos. Coach Steven Esterkamp, however, despaired of his XXL burger. "That was really a lot. I had to give up at some point." the coach said afterwards, laughing.

However, the team event did not miss its effect. "For the guys, it was a great opportunity to see something different and clear their heads from the tough loss on Friday. There was really a lot of laughter and everyone enjoyed the time together." The coach with American roots summed it up afterwards and added: "It's great to get to know a sponsor better and to understand how the business works."

For the upcoming game against Karlsruhe, the foundation was laid. The Uni Baskets Paderborn defeated the Lions from Karlsruhe impressively with 88:57. "The guys had so much energy, maybe it was the XXL portions from Saturday" said a laughing Steven Esterkamp afterwards.

Everyone was sure that the event should definitely be repeated in the future, not only because of the victory and the large portions. "The invitation," confirmed Holger Grauer, "stands permanently! And maybe a baskets professional will learn another profession and become a system administrator with us someday." 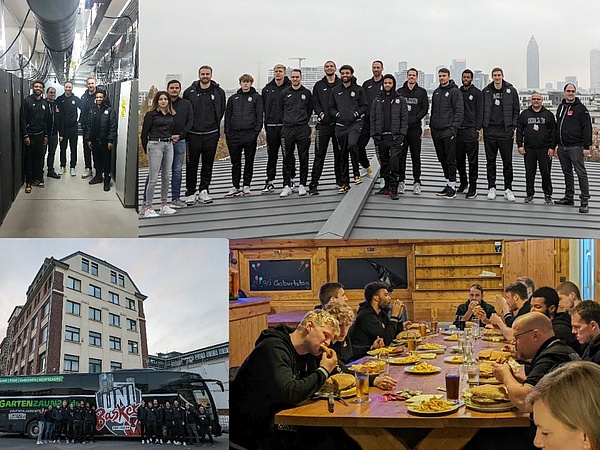