Thanks to an unusual cooperation, the Internet connection of the city's Lernstatt Paderborn platform is now more operational and resilient than ever before:

WestfalenWIND IT GmbH & Co. KG is the only company in the OWL region to operate high-speed fiber optic lines with large bandwidths directly from the Internet hub in Frankfurt am Main to the Paderborn Technology Park, among other locations. The municipal IT service provider GKD Paderborn and its subsidiary, OWL-IT, are based there.

"When we heard about the line problems and the hacker attacks on the Lernstatt, we picked up the phone directly and contacted GKD," explains Fiete Dubberke, co-managing director at WestfalenWIND IT. It quickly became clear that they could help, and within just under 3 days they had provided a 10 gigabit/s line. By way of comparison, that is 440 times faster than an average household Internet connection.

"We were very happy to accept the offer," says Bernd Kürpick, managing director of the municipal IT service provider GKD and OWL-IT. In order to help quickly and unbureaucratically, he says, WestfalenWIND IT even provided its services, including installation costs, free of charge for the remaining 10 days in January, initially on a trial basis.

"In the meantime, the city of Paderborn has signed a longer-term contract with the wind fiber-optic provider," said Burkhard Pöhler, the city's learning center manager. As a result, he said, they are now also in a position to fend off the massive hacker attacks even better than before.

"So far, we have already intercepted 33 gigabit/s attacks of DDoS attacks using an elaborate hardware solution, which regularly overloaded the Lernstatt's previous line when considered alone," Dubberke explains. WestfalenWIND IT is able to do this, he says, because it is working with the highly experienced IT company aixit from Frankfurt. aixit is responsible for the lighting fiber optic line from Frankfurt to Paderborn.

"Since we can expand the bandwidth of the line almost at will, this is a real project for the future. The OWL region is rather underserved when it comes to broadband Internet, so it's great that we have the opportunity to support here," says Holger Grauer, CEO of aixit GmbH.

Both sides are now considering how this unique fiber optic direct connection to the world's largest Internet hub in Frankfurt can be further exploited to the advantage of the digital model region of Paderborn. Technically feasible and also implementable in the short term are, for example, direct connections to public institutions such as schools, but also industrial estates, explains WestfalenWIND IT Managing Director Fiete Dubberke.

WestfalenWIND IT, headquartered in the Benhauser Feld industrial park in Paderborn, offers fiber optic connections as well as the operation of data centers in wind turbines and other IT services such as managed services. 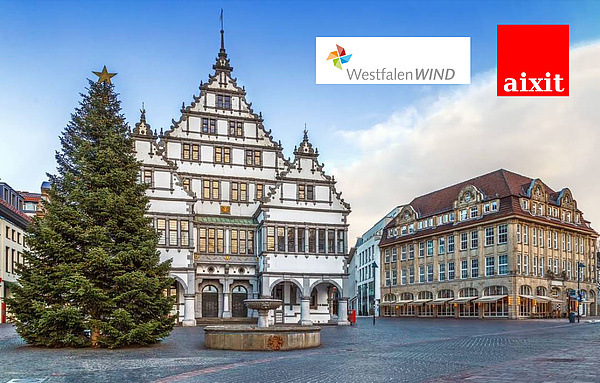